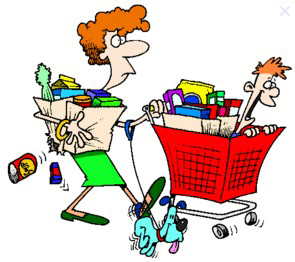 Man: Hey. Can you give me a hand with the groceries? I told you I could do the shopping.
Woman: Wow! Do we really need all this stuff? Let me see that receipt.
Man: Hey, I only bought the essentials.
Woman: Okay. Let's see. Dog food. Twenty-four dollars and seventy cents? We don't even have a dog!
Man: Well, it was going to be a surprise, but look in the back of the truck.
Woman: What?
Man: Ah, ha, hah. Speechless. I knew you'd love him.
Woman: That thing? That dog's as big as a horse. He probably eats like one, too.
Man: Ah, but he's sure friendly and …
Woman: Whatever. Oh, eighteen dollars and nineteen cents for twenty-four cans of tomato juice? You don't even like that stuff!
Man: Not yet. But I've decided to change my eating habits.
Woman: Right.
Man: You'll see, you'll see.
Woman: Okay. Let's see. Three eighty-four for a box of chocolate chip cookies and twelve fifty-six for a case  of soft drinks.
Man: Hey, I'll just eat a cookie or two every other hour. In fact, they're a great source of carbohydrates for energy.
Woman: Oh dear. I can't believe what I'm hearing. Let's see. A carton of eggs, two fifty for a gallon of milk, three cans of tuna. Okay. And finally two steaks for eight fourteen. Now, something worth enjoying. I'll get the grill started.
Man: Oh, we . . . w . . . well. The steaks are for Herbert.
Woman: Herbert? Who's Herbert?
Man: Uh, he's the dog.
Woman: No! Absolutely not!
Man:no, no, no, and the steaks might help him adjust to his new house. Hey, what are you doing? Oh, no. Why did you throw the steaks out on the ground outside?
Woman: Well, you and Herbert can get to know each other better. I'm going out to eat by myself.
Man: Ughh.