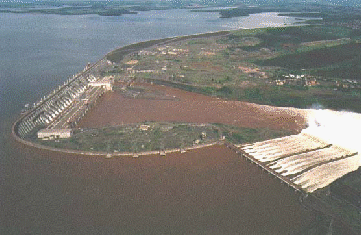 The Itaipu Dam is found on the Paean river, close to the Brazil - Paraguay border. The dam is located in the Parana region in Brazil, close to Iguassu Falls. It has one of the world's largest hydro-electric power stations.

There had been many droughts in Brazil and Paraguay. The governments in both countries wanted to use water from the rivers effectively. They wanted to have enough water for the people in their homes.

Farmers needed water for crops and for cattle. Factories and industries also needed water. It was necessary that a dam must be built.

Some of the gates in the Itaipu Dam are left open so that the water level in the River Parana is the same level throughout the year. Moreover, people can now visit the Iguassu National Park to look at the wildlife there. Before the dam was built, there was no road and it was difficult to travel there.

In addition, the dam is also a hydroelectric power station. There are 18 turbines or engines in the dam wall. These turbines are turned by the water to make electricity. Cables take the electricity to homes and factories in Brazil and Paraguay. Without electricity people would not be able to watch television, or use fridges and electric appliances. There would also be no lighting.