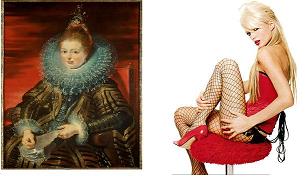 For many people, supermodel Claudia Schiffer is the perfect beauty: tall and slim, blue-eyed, tanned with long, blond hair. People call her “the most beautiful woman in the world”.

But people have not always had the same ideas about beauty. Until the 1920s, suntanned people were considered as poor people. Women liked staying out of the sun to keep them as pale as possible.

Five hundred years ago, in the times of Queen Elizabeth I of England, fashionable women even painted their faces to make them whiter. And people in the eighteenth century would certainly not have thought much of Claudia Schiffer’s hair.

People in that time never went out without their wigs - which were so enormous and dirty. It was quite common to find a mouse living in them.

As for the perfect beauty painted by Rubens in the seventeenth century, if they wanted to be supermodels today they would have to spend months on a diet!