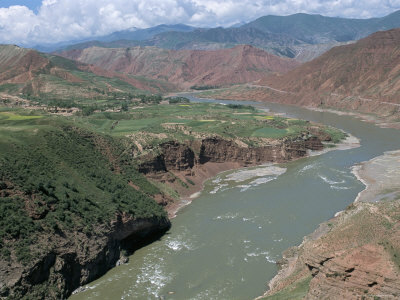 1. The Yellow river is the second longest river in China. It carries millions of tons of yellow sand from the deserts of central China, which give the river a yellowish color. The Black Sea lies between six countries, including Russia, Turkey and Ukraine – but it certainly isn’t black!

The name probably comes from the black clouds which can cause storms in the area. And Greenland – the world’s largest island apart from Australia – is more white than green (85% of it is permanently covered in snow and ice). One idea is that the first people who arrived there saw it in the spring.

2. The Dead Sea is not really a sea, but a lake. Water comes into in from the River Jordan, but because the Dead Sea is lower than the land around it, it cannot flow out.

The hot desert sun evaporates the water as quickly as it flows in, leaving salt and other minerals behind. As a result, the Dead Sea is seven times saltier than the sea and people can easily float in it.

3. Can you name the country with the most extreme climate? Two of the hottest and coldest temperatures ever recorded were in the same country – Argentina.

Yes, it’s a very useful lesson for me and everyone.
MatMam

Good, I love it
Ronaldo